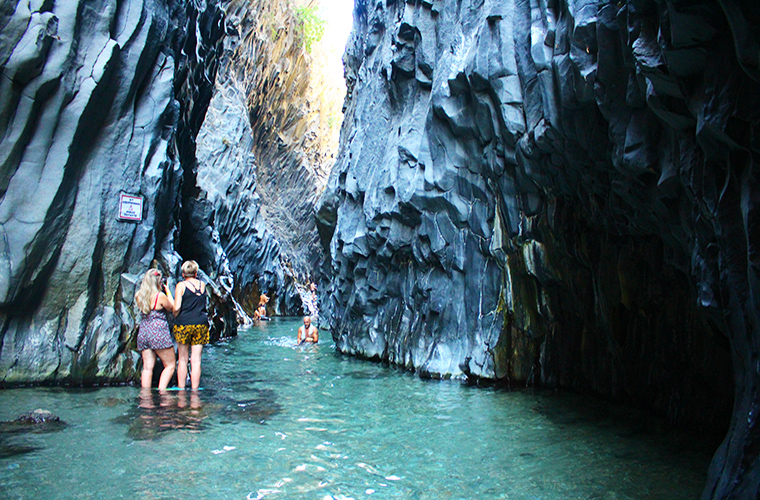 Today we are heading towards the epic canyon Gole Alcantara. The drive here seems to have taken forever. Somehow, we are all inevitably a bit bad-tempered. We leave the house much later than we would have liked; The sun is blazing; We are already hot. In short we are lost. Trying to find the car park and the local entrance to the canyon, the satnav somehow also get lost.

See, the thing is that Sicily holds different and various treasures in every corner. And we love off the beaten track places. However those do not remain off the beaten track for that long. So, in an attempt to support the local community, we loose ourselves trying to find their recommended entrance. In other words, we won’t find signposts to all the best places here.

Just downhill. We can no longer loose our bearings here as we descend down sharp steps. Not utterly dramatic but well maintained. The bottom takes a long time to get closer despite the steps leading straight to the floor of the canyon. At the bottom of the steps the onsite “café” is an eyesore. A stark reminder of the heavy layers of tourist infrastructure.

And there at last is the epic canyon Gole Alcantara

The legend of the Alcantara reads like a fairy story of gods. Another take to explain the origin of the landscape. As such, the story tells how the Alcantara river was once a calm river. And the only evil in the area are humans. Why? Because they did not respect Mother Nature. The story goes on to say that in this valley live 2 farmers. They were also bothers. One is blind and the other one is healthy. Trouble comes when the healthy brother decides to wrong his blind brother. How? It happens when the time comes to split the harvest. The healthy brother takes most of it. In short he only gives his brother a smaller portion. A flying eagle sees the whole thing and reports to the Lord.

The Lord then gets angry. In short he kills the cheating brother with lightning. The same lightning also hits the pile of crop that the healthy brother has put aside for himself. The pile is therefore transformed into a red mountain that spews lava down the valley and into the sea.

When Neptune sees the lava pouring into the sea, he stops the flow with his bare hands. Neptune is the god of the sea. As a consequence the lava is blocked. An abyss therefore appears in the valley of Alcantara and the lava is sucked down. So the lava hardens as it flows down the abyss. These gunmetal steel walls in the epic canyon Gole Alcantara are what is left of said abyss.

To sum up, “there’s always an element of reality to the myths. It’s a connection with the land that most locals have lost these days”.

The character is undeniable down here at gorges level. The gole are a series of vertiginous lava gorges with swirling rapids. They are Located 20km west of Taormina. There is an undeniable raw beauty to it’s brain-boggling size. Intriguing shiny gunmetal-grey rocks line these low gorges.

The most fascinating fact here is that the Alcantara river flows between lava stones. It means the walls were created by basaltic lava flows as these cooled off rapidly. From the point of entry were our exploration begins, the rapids are less scary than upstream.

This is an unmistakable canyon

Clothes off and tucked into our bags we move towards the water. Our bodies shiver as we dip our toes. It’s cold. Screeching cold. Yet the fiery green as opal water is extremely luring and beautiful. And extra clear too.

Channeling our inner mermaid mode, we make our way upstream. There the canyon takes in startlingly dramatic scenery. The giant vertical walls profile jaw-dropping rock formations. “Don’t look up” is what I feel like saying sometimes as we make baby steps. Our bags above our heads in one hand and camera on the other. The endless vertical walls at points are so narrow claustrophobia becomes a new best friend. The combination of deep cavities and current at points means greater challenge for non confident swimmers.

Luckily for us, the throng of crowd is non existant at this time of the day. Despite the water being intoxicating, we make our way back downstream for a spot of sunbathing. The screeching cold water is for sure getting the best of us.

Further downstream, huge rocks and sun drenched water pools present themselves. This is a tableau that reveals Alcantara natural wonders.

In the movie Gomorrah by director Matteo Garrone, the scene in one of the stories where the king fights a sea monster is shot here. We may consider ourselves sensible people who do not believe in fairy stories. “It is undeniable though that the atmosphere here is somehow wild and magic”.

You can read the remaining of this Sicilian adventure here. 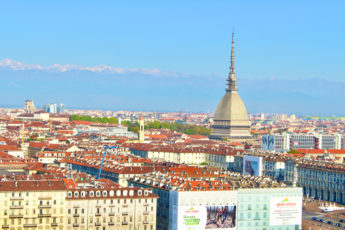 The elegant city of Turin: surprisingly more vibrant than imagined 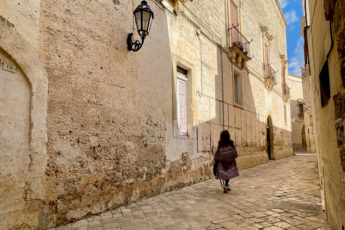 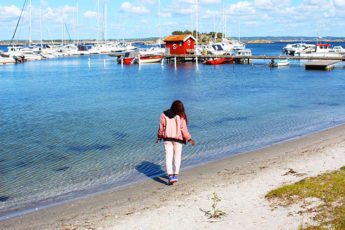 Laidback Gothenburg and its archipelago: stroll and simply be happy