Inside Santa Teresa and Lapa – the heartbeat of Rio de Janeiro

The barios of Santa Teresa and Lapa. Rio de Janeiro. The mere mention of this city sees a smile breaking on most people’s faces. Or a frown. It is mostly  provoked by the cloud of danger that is also associated with the city. Favelas, beaches, wealth. The chasm is striking. The quintesential Santa Teresa and Lapa shed a light on the other face of Rio.

A market near santa teresa and lapa

It’s December. Christmas and pre-carnaval season. Our eagerness leads the way. My friend and I step outside bright and early. To say we are excited is an understatement. As we pause for an açai drink, we contemplate the day ahead of us. A stroll trough the verandas of Santa Teresa and Lapa.

Popular culture lives on in one of Rio’s oldest areas: Santa Teresa and Lapa

I am starring at Arcos de Lapa. The sheer size of the white aqueduct baffles me. Since riding the Bonde is not possible this time, we decide to walk again and again. The bonde is suspended until further notice. Roaming through Lapa, rough and tumble is what springs to my mind. A mix of uneasiness, fascination and excitement fills me. There aren’t many people on the streets. The derelict conditions of the area and the homelessness contrast with the enticing sounds of Samba we hear from surrounding botecos (bar).

The warm air and the deserted streets make for an atmophere i can best describe as raw; The calm before the storm. As much, I am looking forward to exploring the nighttime musical face of Lapa. Hedonistic pursuits.

At the other spectrum of our mapless wander, we find ourselves in Rua do Lavradio. What a striking contrast. It is restored yet it is lacking the historic soul and character that crumbling mansions on the other side of Lapa still convey.

The artistic face of Lapa is flamboyant as we continue our wandering towards la Escadaria Selaron. Jawdropping street art dress the walls and and aged buildings. Music, daily life, social class. It is a depiction of popular aspects of local culture. Underground. Emotive.

It is only when we reach the base of the staircase that the legendary work of the Chilean artist truly hits us. Jorge Selaron’s Escadaria Selaron. This is the bridge between Santa Teresa and Lapa. Fascinated, we embark on a worldwide journey through the 215 steps representing the ever-expanding piece of art. The colourful mosaics, just ike the gafieiras a few streets away in Lapa are the expression of that popular culture.

We move towards the top of the stairway, marveling at Jorge Selaron’s tribute to the Brazilian people. What an intricated artwork. It’s puzzling. Patterned tiles from across the world. We spot the pregnant woman motif so representative of his work. Multicultural heritage.

The signs of neglect after the wealthy moved away are visible. Crumbling buildings just asking for some TLC.

Most of all though, standing on top of the hill feels like being on top of the world. Just imagine standing there in the midst of the afternoon. Your body basking under the golden rays. The hot air shifting through the air reminds you where you are. On your face, that wide smile. We are staring at the gorgeous panorama of Guanabara Bay spreading below. The favelas, unsettling and fascinating are just as close. Altogether, this is just magical yet strange.

As we move from one side of the barrio to the other, we often found ourselves in deserted narrow lanes. Consequently, i am flushed with uneasiness and fascination. From Rua Murtinho, we take in el Parque das Ruinas. As we stroll Largos das Neves, everyday life here feels like we have moved to a smaller village somewhere. The plaza sees families going on with their regular life. Kids are playing. Voices are heard. This is still Santa Teresa. 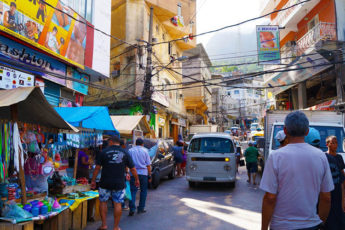 Inside Rio biggest favela Rocinha: how the culture of survival drives the community

« Previous post
Blois – a road trip through French castles of the Loire valley
Next post »
Inside Rio biggest favela Rocinha: how the culture of survival drives the community